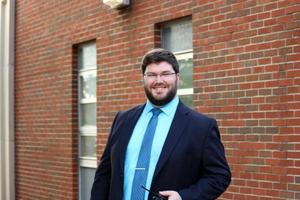 The Third District Music Educators Association has announced that Todd County Middle School Principal, Mr. David Carmichael has been named as their recipient of the “Outstanding Administrator Award” for this year. According to the Kentucky Music Educators Association’s website, this is awarded “to honor a building principal, assistant principal, or district level administrator who has consistently supported music education in his or her school district.” In addition to receiving this district level award (membership is composed of music educators from Christian County to Cumberland County and as far north as Muhlenberg County), Mr. Carmichael has been nominated for the state level award, which will be awarded in February at the Kentucky Music Educators Association’s state conference.

Mr. Carmichael is beginning his third year as principal of Todd County Middle School this year. Prior to working in that capacity, Mr. Carmichael served as the band director/music teacher at TCMS for ten years. Under his baton, the band program grew exponentially and flourished, receiving distinguished ratings at the annual music festivals, with several students being selected each year for honor bands.

The band program has continued to thrive under its current director, Mrs. Heather Dipasquale, but Mr. Carmichael continues to be an active supporter of the program. As principal, he is present at all concerts and performances – whether on or off campus, and has traveled to Murray, KY & Bowling Green, KY on multiple occasions to support these students. Students have often been surprised to have him stop in during band class or a rehearsal and sit down next to one of the students with HIS instrument and play alongside them. He has worked to appropriate funds for the program to allow school instruments to be purchased and maintained for those without the financial capability to afford their own.

This fall, after discussing restrictions and recommendations concerning COVID-19, Mr. Carmichael partnered with Mrs. Dipasquale, Superintendent Mark Thomas and the Todd County Middle School Site Based Decision Making Council to purchase additional instruments so that students at the school would not have to share instruments, but be able to play on their own through a generous program offered through Conn-Selmer (instrument brand).

Congratulations, Mr. Carmichael on this honor and for your service in Todd County Schools!